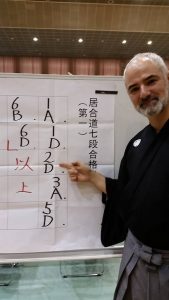 Congratulations to our new Iaido Nanadan!

The Iaido bu would like to congratulate Andy Watson-sensei on passing his seventh dan Iaido grading in Japan. No grading is ever easy, but they do tend to get ever harder as one progresses up the ranks! Andy-sensei has dedicated himself tirelessly for years to both Iaido and Jodo, and this success is a great reward for all that effort. All in the bu are very proud of you, Sensei.