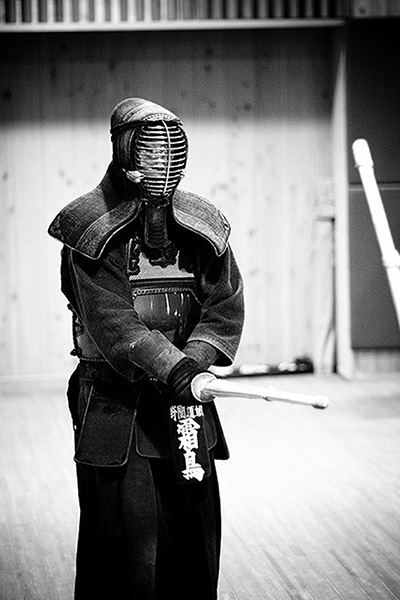 In the Middle Ages, Ito Ittosai Kagehisa developed the style that forms the basis of present day Kendo. Kendo historians estimate that there were more than 200 different sword schools and styles by the end of the sixteenth century.

At the beginning of the eighteenth century, serious thought was given to developing armour to protect trainees from permanent disability, or even death, during vigorous training. Known then as ‘Kenjutsu’, the art of Kendo became more popular with the improvement of protective armour, the simplification of many of the vast number of traditional techniques and the acceptance of rules of conduct within the fencing hall.

From Kenjutsu developed Kendo, using the bamboo sword (‘shinai’) to replace the metal sword, and thus allowing the free practice of swordsmanship. The shinai is made of four splints of bamboo held together at one end, with a tubular leather handle slid over the splints and a leather cup at the other end. The shinai weighs around 500 grams, and various basic cuts and thrusts are made repeatedly to build up speed and stamina.

To focus concentration and to aid correct breathing a shout, or ‘kiai’, is made on the completion of each strike. When practising Kendo, padded armour (traditionally made of bamboo and cotton) is worn over the customary dress of the samurai. To score, a good cut must be delivered to well-defined targets (the top of the head, right wrist and the breastplate) using the upper third of the shinai. Thrusts to the throat may be made with the point of the shinai. All the targets are well protected by the armour.

First impressions of Kendo are of a noisy, aggressive and violent full-contact martial art. Kendo is certainly dynamic, but a little study will soon reveal a high level of skill and concentration, together with a grace and physical agility that any choreographer would appreciate. Students are from all walks of life and of any age, and women train on equal terms with men.

Kendo may be safely practised by men, women and children of all ages, and the type and level of practice may of course be adjusted to suit each pupil. The most senior Kendo teachers in the BKA are 7th Dan, with several 6th and 5th Dans who train in various parts of the country.

If you are starting kendo, you may also be interested in this free download: Kendo Beginners Guide – a new and practical introduction for kendoka of all levels, by Terry Holt sensei.

In 1975 the All Japan Kendo Federation (AJKF) developed then published ‘The Concept and Purpose of Kendo’ which is reproduced below.

Kendo is a way to discipline the human character through the application of the principles of the Katana.

To mold the mind and body.
To cultivate a vigorous spirit,
And through correct and rigid training,
To strive for improvement in the art of Kendo.
To hold in esteem human courtesy and honor.
To associate with others with sincerity.
And to forever pursue the cultivation of oneself.
Thus will one be able:
To love ones country and society.
To contribute to the development of culture
And to promote peace and prosperity among all peoples.